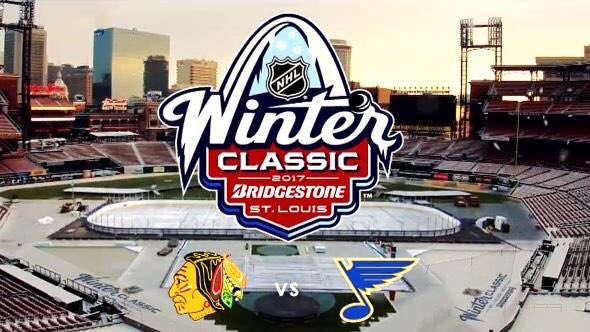 January seems a long, long way away right now, but the NHL held its annual late-summer press event to promote the forthcoming Winter Classic. The 2017 event, which will take place Jan. 2 at Busch Stadium, home of the St. Louis Cardinals, will feature the St. Louis Blues and Chicago Blackhawks. There’s usually not a ton of news that we didn’t already know that comes out of these events, but we now know the rink configuration for Busch, which isn’t much different from previous Winter Classics at a baseball venue. The end boards will stretch from first to third, with the St. Louis skyline as a nice backdrop (photo below). While the press conference didn’t spend much time on it, we also know which logos the two teams will be using for the event. With the Blues celebrating their 50th season since entering the league as an expansion franchise in 1967, it appears the team will be using their original logo for their jerseys. Meanwhile, the Blackhawks, who will be playing in their third Winter Classic and fifth outdoor game overall, appear to be using a logo similar to the ones that adorned their jerseys in the late 1950s to mid-1960s. The actual uniforms have not been unveiled, however, so we won’t know if their true throwbacks or jerseys that take a few liberties with the old look like we’ve seen a bit in years past. It was also announced that Blues and Blackhawks alumni teams will play in a special alumni game on Dec. 31. Rosters for those squads will be revealed at a later date. With so many Blues alumni still living in St. Louis. The league also introduced its official logo for the event, which prominently features the Gateway Arch, of course: