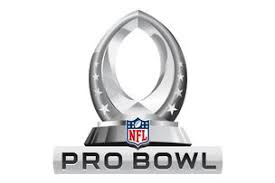 GLENDALE—J.J. Watt danced, Jimmy Graham dunked, Odell Beckham Jr. dazzled. The Bears Martellis Bennett caught 5 passes for 25 yards.The Pro Bowl in the desert was all about having a good time.Few moved very fast, no one flattened a quarterback and there were no bone-jarring hits in the gentle, friendly version of football played Sunday.Even in a game dominated by offense, Watt was the star.The Texans defensive end intercepted pass, recovered a fumble and led the crowd in dances during commercial breaks.Team Irvin defeated 32-28 Watt’s Team Carter, but the score doesn’t matter in the NFL’s all-star game. Everyone seemed to enjoy themselves, no one more so than Watt, moving to the music while the cheerleaders danced.

”I just tried to enjoy it,” he said. ”That’s what the Pro Bowl is all about, giving the fans a good show. Everybody worked so hard to get here, you want to enjoy yourself and play some good ball. Guys are dancing around and having a good time, that’s what it’s all about.”

In its one year out of Hawaii, the game drew a sellout crowd of 63,225.Memorable moments came from Graham, the Saints’ tight end who dunked over the crossbar twice after TD catches – this time with no penalty, and Giants rookie Beckham, who made a diving grab at midfield.Graham’s second touchdown, on a 1-yard, fourth-down pass from Matt Ryan, was the winning TD with 3:10 to play.Greg Olsen and Emmanuel Sanders also caught a pair of touchdown passes apiece. Andrew Luck was nearly perfect in his short time on the field, completing 9 of 10 for 119 yards and two scores. Matthew Stafford threw for 316 yards and two TDs and was the offensive MVP.The Pro Bowl took a one-year hiatus from Hawaii to be played in the desert a week before the Super Bowl. The big crowd watched the teams moved up and down the field, often without much resistance.

”You don’t have hardly any time to get timing down or anything else,” New Orleans quarterback Drew Brees said. ”So much of what you’re doing out there is street ball. `’

If the players missed the beach, they wouldn’t let on.

”It’s been fantastic,” Dallas quarterback Tony Romo said. ”The turnout here at the stadium is just like an NFL game.”

Romo knew this wasn’t a real NFL game.The NFL scrapped the AFC vs. NFC format last year in favor of having two big-name former players draft players four days before the game. This year, the honor went to Michael Irvin and Cris Carter.There were teammates playing against teammates.When Green Bay’s Jordy Nelson made a pretty fingertip touchdown catch from Brees for Team Carter. He celebrated with his Packers teammate Clay Matthews, who was playing for the other team.Beckham dove to the ground and gathered in Stafford’s long pass just as the ball was about to hit the ground. When Graham caught a six-yard touchdown pass from Stafford, he soared to dunk the ball over crossbar. The New Orleans tight end was fined $30,000 when he did that twice, and was penalized both times, in a preseason game. There was no penalty on Sunday.The goal posts were narrowed to from 18.6 feet to 14 feet on all kicks, not just PATs as had been previously announced. The PATs also were moved back to make it a 33-yard kick.The skinny posts claimed an unlikely victim when Adam Vinatieri missed two PATs. The 42-year-old Colts kicker hasn’t missed an extra point in real games in five years. He also missed a 38-yard field goal.Another rule was no blitzing. Denver’s Von Miller violated that one and, on the next play after the unsportsmanlike conduct penalty, Luck threw a 14-yard touchdown pass to his Indianapolis teammate T.Y. Hilton.Winners got what amounts to pocket change for them – $55,000 apiece, losers $28,000.